The Princess Guide: Everything there is to know about the American classic ‘The Princess Bride’ 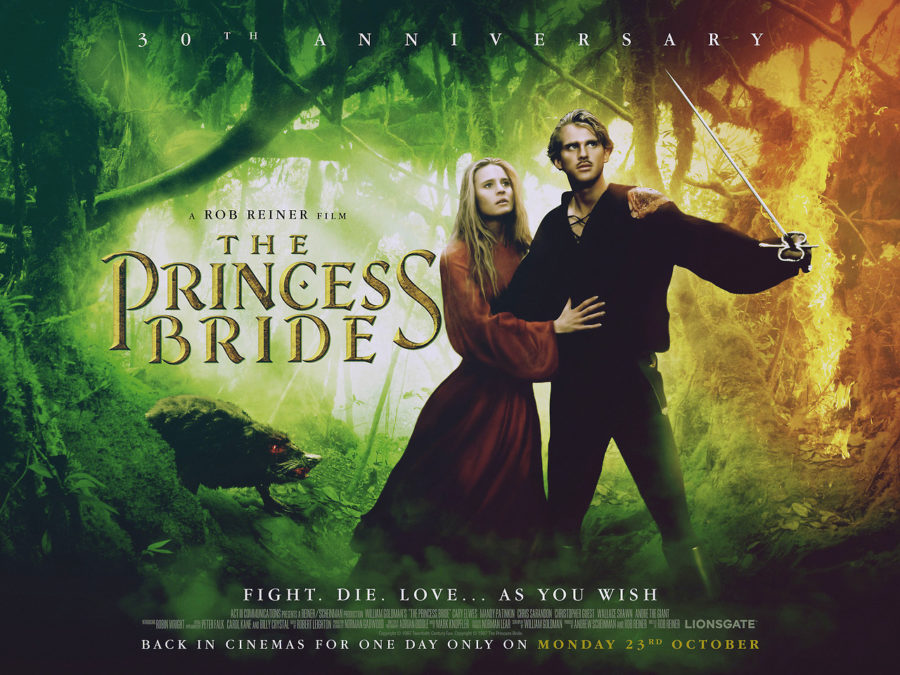 An elderly man begins reading a story to his young grandson who is home sick. The grandson is unsure of if he will like the story, but allows his grandfather to begin to tell the story regardless. The story is a classic romantic tale about a girl named Buttercup who is engaged to Prince Humperdinck. She is kidnapped and held against her will as a ploy to star a war. It is up to Westley (her childhood love who she believed to be dead) to rescue her. Along the way he meets a thief and his hired helpers, a swordsman, and a giant, who become Westley’s companions in his search for the Princess.  Westley faces many obstacles throughout the story, but the real question is, Will the grandfather be able to finish the story despite the grandson’s obvious distaste of all those ‘kissing scenes’?

One of the major themes of The Princess Bride was the ideal of loyalty. Throughout the entire movie, we see vastly different characters demonstrating loyalty in their own right. An example of this is Inigo Montoya, who displays fierce loyalty to his father, who was killed by the six-fingered man. Throughout the entire movie, his sole goal is to avenge his father’s death, which shows remarkable family loyalty. Inigo’s entire reason for becoming a swordsman is because of his undying loyalty to his father and his family.

There are many stories represented in this movie, but the main one that we follow is Westley. I know this because his goal of rescuing Buttercup is the center plot-line that the movie follows. Westley used to be a farm-boy, but following his journey for wealth on the ocean he became the Dread Pirate Roberts who was a feared and revered pillager. Westley is ,without a doubt, an adventurer. Westley wants to rescue Buttercup from her captures as well as free her from her engagement to the odious Prince. Westley faces many obstacles in pursuit of his want including, but not limited to: a sword-fight with Inigo Montoya, a fistfight with a giant named Fezzik, a battle of wits with the overconfident Vizzini, the Fire Swamp, the Pit of Despair, and the Machine. At the beginning of the movie, we see him as a love-consumed young man, but as the story progresses, his love for Buttercup allows him to become more intelligent, powerful, and clever. His love-driven motivation gives way to a motivated man who is in love. He as a character does not change a ton, but there are subtle shifts in his personality and motivation, as well as his trust in others. Westley is incredibly loyal. Despite not seeing the love of his life for many years, and having a life of affluence as the Dread Pirate Roberts, his main goal remains to be finding her, no matter the cost.

One narrative device that The Princess Bride employs is motif in the form of interrupting one story with another. The Princess Bride aims for its audience not to take it too seriously. This is hard to accomplish considering that the plot is oftentimes depressing or even scary. To counter this, the film often takes us out of the moment with an interruption by the grandson or grandfather as a way of paralleling their experience to the one that we have. By doing this, we are harshly torn back into 1987, reminding us as the viewer that this is only a story being told, and treating it as anything else is missing the point of the tale. This narrative device is jarring to say the least, but very effective in keeping the plot light an airy, which is an evident goal of the film. This device contributes to the message of the film because it allows us to see the theme of loyalty outside of the immediate plot-line. The theme of loyalty is evident when the grandfather describes how the novel had been in the family for generations, and he is metaphorically passing the torch by reading it to his grandson. Although this narrative device does not demonstrate the message inside our main cast of characters, the breaking of the plot line allows us to see family loyalty in a more real-life scenario.

Camera angles are a major cinematic technique used in The Princess Bride to help advance the plot and convey specific messages. An example of this is how medium shots are used to convey a connection between two characters or objects. This shot is most commonly used to demonstrate the relationship between Westley and Buttercup. In most instances, the shot is fairly neutral, allowing only their connection to shine through without purposefully altering the camera angles to shift our interpretation. Another example of camera angles being used with cinematic intent is when Buttercup is being kidnapped, all shots of her are done from a high angle. This conveys her to be delicate and small, the damsel in distress. Inversely, her kidnappers are shot from a low angle, showing them as dominant and assertive. Camera angles help contribute to the message of the movie by demonstrating relationships between characters who are loyal to each other. The best example of this is between Westley and Buttercup. They are often portrayed together in medium or closeup shots with the two of them as the obvious focus. This shows their devotion and dedication to each other, and their loyalty to their relationship.

Personally, I really enjoyed this movie. I liked that it was fairly action packed and plot-heavy, but also filled to the brim with satire and other comedic relief. The film did not take itself too seriously, and I think that made it all the better. While there was a very compelling plot that was easy and fun to follow, there was constant breaks from the depressing and scary to make light of the situation, usually ironically. This is something I really respect and like to see in films, is the ability to make fun of itself to advance the storyline. That is not something that is easy to do, and The Princess Bride managed it beautifully.

This movie had  very strong narrative techniques including masterful satire and irony, as well as motif and symbolism. The plot, which fairly basic (guy loves girl, girl gets kidnapped, guy must save girl) on paper, was incredibly interesting and I firmly believe that these narrative devices are what made the film so enjoyable to watch. The mood of the film is also one of its strengths. It could very well be a morose and serious film, yet it is light and funny, and overall just enjoyable to watch.

The only thing that I did not really like about this movie was the jarring jumps between fantasy and reality (and thus between moods). From a cinematic point of view, I understand how doing so helped advance the plot and keep the story light. However, it made some of the plot confusing or seem as if some really important sections were glossed over for the sake of making sure the film was not too serious. Despite my initial misgivings about this choice, I still loved the film overall, and enjoyed the ironic use of comedic dialogue in the face of serious plot.

The message that I identified from this film was loyalty. Loyalty plays a major role in my life as well. As a Hufflepuff, (I took the Pottermore test and everything) loyalty to my friends and family is one of my most valued beliefs. Being loyal is something that I constantly strive to be because it is a trait I admire in other people. This movies underlying theme of loyalty is probably why I enjoyed it so much, because I believe so strongly in being loyal to your ideas, your friends, your family, and most importantly yourself.

I would 100% recommend this movie to others. Seriously, if you haven’t seen it, clear your schedule for the evening and just watch it. This movie is so exciting to watch, you will immediately become entranced in the world, but is also super fun and relaxing to watch. The plot, while entertaining, does not take a rocket-scientist to understand, making it great to watch if you are tired after a long day or relaxing in your pajamas on the weekend. The satire and irony in this movie are spot on, making it funny on top of its already charming and action-packed persona. Overall, this movie is fantastic, so do yourself a favor and go watch it!