The Quite Fantastic Mr. Fox 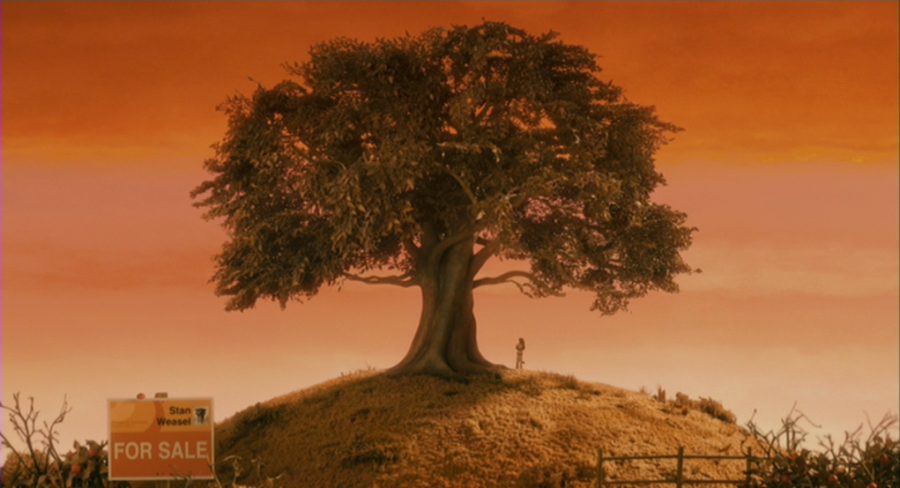 Quarantine sucks. But now I have no excuse to not watch all the movies that I’ve planned on watching for a long time. Wes Anderson is a director that I’ve heard lots of hype about, so I figured now was the time to get into his stuff.

And Fantastic Mr. Fox was definitely the right place to start! It follows George Clooney as Mr. Fox as him and his family go on an adventure stealing from three evil farmers and dealing with the disastrous but whimsical consequences.

We begin with Mrs. Fox announcing her pregnancy to her husband in the middle of a chicken-coop raid. A few years later, the family has moved out to a tree overseeing the farms of the villains named Boggis, Bunce, and Bean. They now have an angsty, outcast son named Ash who has a grudge against his prodigy cousin Kristofferson.

But Mr. Fox is growing weary of his routine life as a newspaper columnist. To try and spice things up, he goes back to his thieving ways and hatches a plan to steal food from Boggis, Bunce, and Bean. Unfortunately, Bean, the cruelest of the bunch, won’t let it slide. He leads the others to seek revenge, and the Fox family as well as most of the surrounding animal world is forced underground to avoid the three farmers.

Eventually, the animals plan a retaliation against Boggis, Bunce, and Bean. They end up living happily ever after in an underground community with direct access to a grocery store, AKA unlimited food.

Mr. Fox and Ash are both the main protagonists of the story. Most of our narrative is through their eyes. In the beginning, most scenes are of Fox scheming to steal from the farmers or Ash feeling misplaced in school and being jealous of Kristofferson. Fox wants excitement and attention and also, at a more basic level, food! Ash wants to fit in and get his father’s approval. By the end, Mr. Fox’s craziness has paid off and he has what he wants. But the real change comes from Ash, who now is much warmer towards his cousin and more confident in who he is.

The flashback at at the beginning also is an effective device in this film. It sets up Mr. Fox’s character, how much he loves the adventure and fun of heists. It also establishes Mr. Fox and Mrs. Fox’s relationship. Their chemistry is very real, and it’s clear they really care about each other.

The cinematography of this movie is actually incredible. It’s what Wes Anderson is known for, and it’s understandable why. Bright yellows and oranges, every character fits into the curated color palette. The colors in this movie create such a beautiful whimsical world. I couldn’t look away from the screen if I wanted to, the world was just so entrancing! And the music also helps with this, the climactic fight scene has a haunting little song about Boggis, Bunce, and Bean that is still stuck in my head! Both of these elements make the film a truly immersive experience.

I truly loved Fantastic Mr. Fox. It was a fun, whimsical adventure that helped me escape from the hell that is quarantine. The story was engaging, the characters felt real, and the visuals were everything. The only thing I felt iffy about how much of a narcissist Mr. Fox was, and how that narcissism kind of ends up paying off at the end? But it didn’t distract from how much I enjoyed the movie, so whatever! I’d definitely recommend!