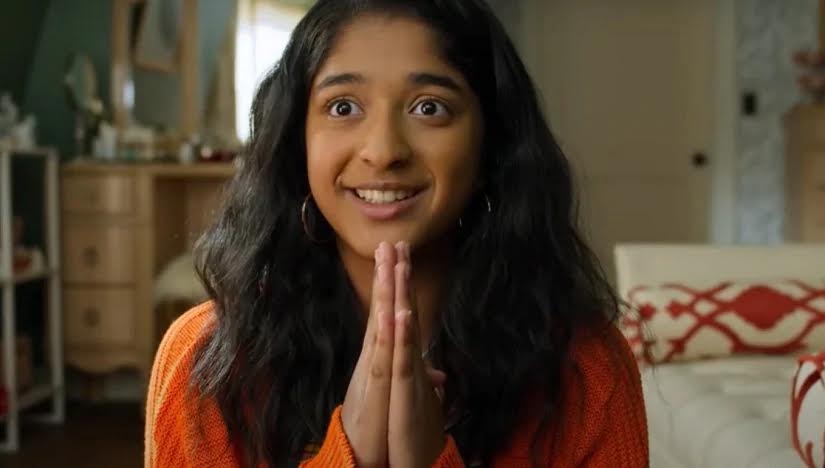 Devi prays to the Gods for a good sophomore year. And a boyfriend.

In March of 2019 I saw a tweet that Mindy Kaling was releasing a “coming-of-age series about the complicated life of a modern-day first generation Indian American teenage girl.” I had just spent the first semester of the school year doing research for my AP Seminar class on the impacts of media representation for people of color. I recently ended my senior Speech and Debate season where the topic of my speech was the same. To say that I love film and television and all things representation oriented would be an understatement. A show about an Indian teenage girl was something that I’ve always dreamt of. And then, 44 days into quarantine, 33 days before I virtually graduate from high school, Never Have I Ever arrived.

It features fifteen year old Devi Vishwakumar, who’s dealing with the death of her father, figuring out how her Indian culture fits into her identity and, of course, the drama of high school boys. This girl was exactly the character I had inadvertently been waiting for my entire life for. She’s raunchy, smart, angry, self-obsessed, and fundamentally bold. Devi is written as so genuinely fifteen years old and so real in everything she thinks and feels, she could be me.

No, really, while watching the show, I saw one million different aspects of myself throughout my life represented. The emotional core of Devi processing her dad’s death, for example, was spot on. Grief is something that I have a relationship with. Last year I lost one of my closest friends in a car accident. I don’t think anything has changed me as much as that did. To see Devi on screen dealing with triggers, nights trying to think of anything else, and impulsive behavior to push it down, it reminded me a lot of my own grieving experience. Allowing yourself to be vulnerable with people who don’t fully get it is really hard, and that was also something I saw in Devi. Devi and Mohan’s relationship, captured in flashback, feels real, her loss is real, and the way her grief affects everything she does is even more real.

But the show also reflects some of the fun parts of my life, including the romantic plots. First of all, can I just say that it was nice to see myself as a romantic protagonist for once in my life instead of the sassy best friend character who cheers the pretty white girl on? Second of all, I most definitely have spent my time pining for a boyfriend who would swoop in and save me from my sadness (and virginity).

The flirtation-ship that Devi has with the absolute babe that is cool guy Paxton Hall-Yoshida felt like an uncanny amalgamation of many similar dynamics I’ve had with boys who also think that I’m “weird, in a good way.” And don’t get me started on Ben! Now, all I want is a rich, lonely, nerd who cries at the dermatologist and can’t drive on the freeway to spend time with. Ms. Mindy Kaling really tapped into the buried desire Indian-American gals have to kiss their Model UN rivals.

The romantic relationships in the show are just so entertaining, the balance between being sweet and awkward is perfect! The teenage boys really feel like teenage boys, albeit definitely more lovable than the ones I’ve had to deal with.

But it’s not just the romantic interests that are fleshed out, it’s clear that Kaling respected each character and took the time to make them more than just two-dimensional sidekicks. Eleanor and Fabiola, Devi’s best friends, are given full arcs that don’t just revolve around the main character. But these arcs are still helpful to Devi’s own development, teaching her that she needs to see them as the full people that they are. Even though my friends aren’t exactly like Fabiola and Eleanor, the connections the trio had with one another were relatable. And every single episode, I was laughing at something new all of these characters did. Some of my favorite jokes involve Devi’s cousin Kamala’s boyfriend Steve and Paxton’s friend Trent, who are both contenders for himbo of the year. But weaved delicately with that light-hearted tone, there were also real themes about dealing with and accepting your culture.

There’s one scene in particular that felt so deeply intimate to me. In episode four, Devi and her family are at the local celebration of Ganesh Puja. Once I got over the initial excitement that there even was a Ganesh Puja on my actual, real-life screen, things got even better.

Devi begins to talk to her friend Parvesh, one of the boys back home from his first year at Stanford to celebrate the holiday. She jumps into what seems to be a regular routine for the pair, complaining about having to be at the puja. But, then, Parvesh tells her that college has changed his perspective. He says that seeing his classmates embrace their own culture forced him to ask, “why do I think it’s so weird and embarrassing to be Indian?”

And hearing that summarized this whole big journey I’ve gone on with my own culture. I remember going to similar Hindu events in Denver when I was younger, and I felt every single thing that Devi felt. I was uncomfortable in my itchy half-saris, I was out of place watching everyone else enthusiastically praying, and I felt superior to everyone because back home I was eating PB&Js with my white friends.

And this year, right before I’m about to go off to college, I’ve started to reflect on why I couldn’t embrace my culture before now. Why did I think it was so weird and embarrassing to be Indian? Seeing Devi go through that same experience, in that moment, I felt more seen than I ever had watching a TV show or movie.

Watching Devi stumble through her sophomore year in Never Have I Ever, I got this overwhelming feeling that things are going to be okay. And that’s something I’ve been desperately longing for lately. Not just because I’ve been quarantining for the past 50 days, but because I am quickly approaching the end of my high school experience. Never Have I Ever seemed to wrap up all these emotions and experiences that I’ve dealt with for the past four years in the perfect ten-episode package. It was like closure that I didn’t know I needed. Not to mention that I’ve been facing so much uncertainty about the future. I know I want to be a screenwriter, I want to create stories that matter. But it’s scary to look into the world of the film industry and not know how to or if I’ll get there. Watching this show, and feeling how much it impacted me to be represented in such an intimate way, I know for a fact that no matter how crazy or scary it seems, it’s what I want to do.

So for that, and for the entire show, I want to thank Mindy Kaling, Lang Fisher, Maitreyi Ramakrishnan, and everyone involved with making Never Have I Ever. This is the first time I’ve seen the kind of stories I want to tell on screen, and I cannot wait to join you all in the writers room.