Senior Tatum Coe just made her debut as the first female member of the football team. 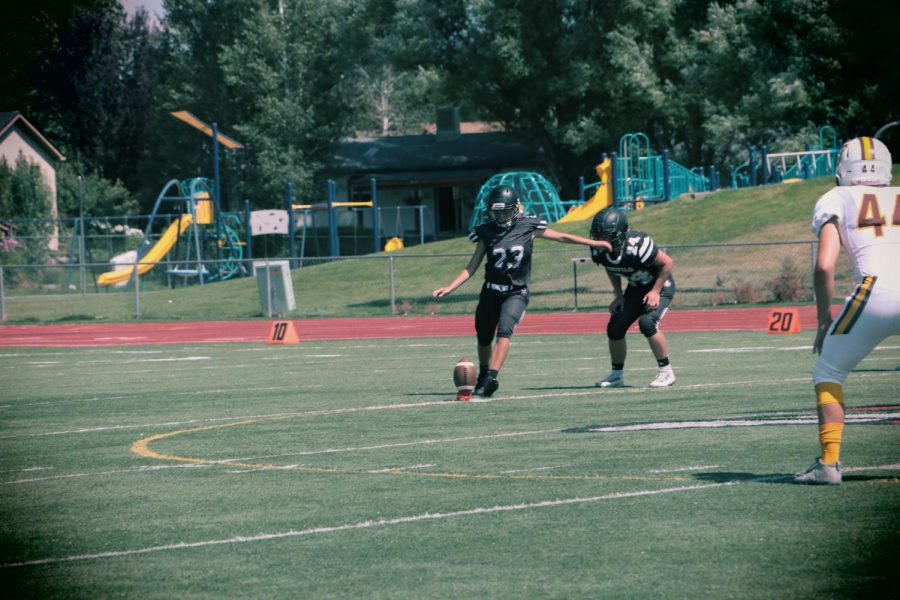 Last week Eagle Valley Football beat former 3A state champs Thomas Jefferson in double overtime. This was already a game to remember seeing that it was the first win of the season but many might not know that history was also made during this game. Senior Tatum Coe became the first ever girl member of the Eagle Valley Football team as their new kicker.

The decision for Coe to become a kicker started out as a joke, “…since sophomore year, I’ve been saying I’d be kicker. Since then you know there was a change in the coaching staff and it’s my senior year so I just thought why not.” Tatum kicked twice during the game and had the biggest fan section in the stands.

Talking about the game Coe remembers it being, “…really fun. It was really cool to see all the hard work, all the guys put in, over the past three months to see it pay off like that against defending state champs was really cool, especially when no one believed we could do it.”

Although this was a high stakes game Coe wasn’t nervous or scared, she even has a ritual for right before games. “I always buckle the right side of my chest pads before the left side,” explains Coe. It seems like her ritual worked so let’s hope that Coe always remembers to buckle the right side first.

There was a lot of preparation and practice that went into getting ready for the game so what does a normal practice look like for Coe? “…we warm up, and then I kind of meander around. I watch offense, watch defense and then sometimes at the end when we’re running, I’ll kick a couple to knock some screws off, and then I’m done.” Coe practices seven days a week along with the rest of the team and it’s been great.

“Everyone’s been super accepting, and I feel like a valued member of the team. There’s jokes, there’s high fives, it’s awesome. I love it.” The team environment has been so good that Coe’s favorite part about playing is, “…probably just being around the guys all the time. It’s so funny. There’s never a dull moment. It’s awesome.”

Being the first girl to play football for Eagle Valley has made Coe a role model for other girls and she knows that it is a position of honor that she hopes to live up to. Coe hopes that other girls will see her and know that, “you can do whatever the heck you want to do, I know that sounds cheesy but it’s true. You don’t let anything stop you. Adversity pushes you down, you get back up.” Coe will definitely continue to inspire other young girls throughout the season.

Coe didn’t become the kicker of the team without any training, she plays club soccer for Vail Valley Soccer Club as well as kicking. When it comes to balancing football and soccer, “Honestly, it hasn’t been that difficult. Both coaches have been really easy to work with and like for football I only kick really intensely like on one day that I don’t have soccer so it’s been good.” Good thing everything works together in her schedule because the football team is really lucky to have Coe.

As for her hopes for the season Coe just wants to do her part. “I want to, you know, deliver when put under pressure. And I want to be there for my teammates, you know, not only when things are good but also when things are not so good.” Tatum Coe has been a great addition to the football team as a supportive teammate as well as a phenomenal kicker. You can watch Coe at any of her upcoming games and dates can be found on MaxPreps.