The Good, The Bad and The Freshmen 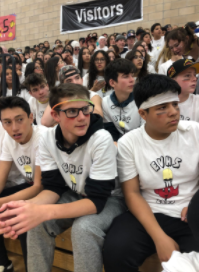 The Freshman Class of 2025 at Devil Duels.

Over the course of the 2021-2022 school year, there have been a lot of changes to the school as well as a lot of feelings about the class of 2025. Ultimately, this begs the question; is this the worst Freshmen class the school has seen? Everyone can seem to agree that the Freshmen class is different from the other classes but not everyone thinks the same about the class as a whole.

As we look deeper into what is different about the Freshmen class at Eagle Valley, differing opinions arise. When asked if the Freshmen at EVHS were indeed the worst class, Veda Peck Davis ‘23 said, “I would say the freshmen are probably the worst class just because of how they acted with all the Tik Tok trends and I don’t know if like they’re behind some of the Instagram pages. But yeah, I think they could have been more responsible and grown-up.”

Amidst the negative opinions of students and teachers about the behavior of the Freshmen, some believe differently. Mr. Brown, a teacher, and coach at EVHS said in an interview, “I think it has shifted. I think that when the freshmen class first got here, there were a bunch of students that just weren’t really used to how school worked. I think that a lot of that had to do with Covid being so disruptive to their learning through middle school.”

The freshmen have certainly created a reputation for themselves. At the start of the second semester, a new phone policy was initiated. Many believe that the cause for this phone ban is because of the freshmen, but are they truly to blame? When asked about the phone ban, Brown answered, “I do not think that the Freshmen are directly responsible for the phone ban. I think that is a school-wide thing. Freshmen, Sophomores, Juniors, and Seniors all hold an equal part about why that phone ban came about and, to be honest, I don’t know that the teachers were innocent in that either.”

However, not everyone feels the same about who is to take the blame for the reinforced phone policy. When asked the same question, Davis replied, “I feel like the upperclassmen know like the rules of the phones you know and they don’t really disrespect what the teachers ask and the freshmen just come in they’re like- on their phones you know?”

Overall, there is not one opinion that is right on the Freshmen of EVHS and there is no telling if they are the worst class ever. As the second-semester barrels on, only time will tell.